You Can Transcribe and Send the U.S. Constitution to White House, in Morgan O’Hara’s Show at Mitchell Algus in New York

As Washington, D.C., is gripped by another major political showdown, one New York gallery is hosting some rather timely programming.

Mitchell Algus Gallery is currently presenting an exhibition by Morgan O’Hara called “Handwriting the Constitution & Portraits for the 21st Century,” at which visitors can transcribe and send copies of the U.S. Constitution to the White House, senators, and representatives. The show, which runs through June 2, is one of three exhibitions the artist has on view in New York—the others are at Anita Rogers Gallery and Magdalena Keck Gallery. 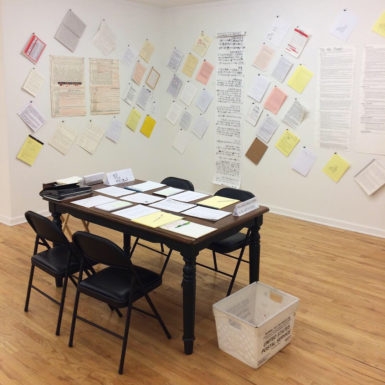 Since 2017, O’Hara has organized more than 100 iterations of her Handwriting the Constitution; the new version marks the piece’s 102nd edition. The piece has only acquired new importance with time, Algus told me in an interview, noting that the front page of Thursday’s New York Times features a photograph of a hand holding a copy of the Constitution. “Morgan’s sort of a force of nature,” the dealer said.