Please join us for TAVERNA REBETIKA, a night of Traditional Rebetiko and Smyrnaiko music hosted by Anita Rogers Gallery in SoHo on December 1st, 2018. 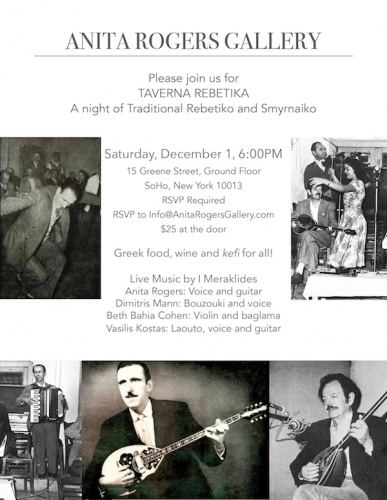 Greek food, wine and kefi for all!

Live Music by I Meraklides On view at Anita Rogers Gallery

A man can look at this little pile on his bureau for thirty years and never once see it. It is as invisible as his own hand. Once I saw it, however, the search became possible. When I was a child I imprinted on Cezanne’s Bather at MOMA, just like those incubator-hatched goslings fixated on the wading boots of the Austrian ornithologist Konrad Lorenz in 1935. It was love at first sight as Lorenz brilliantly directed his babies into the lake for their very first swimming lesson. For me too, the image of that Cezanne was instantly and permanently engraved on my brain: a slender body with hands firmly grasped on his hips and two clumsy feet poised to move forward. Additionally, I detected an echo of my own face and head: skewed downward and resolutely self-righteous and I loved the young man’s expression of cagey dissent. That painting created a void in me the size of the universe. How to fill it?

Not much happens very fast for me and I’ve come to understand Ad Reinhardt’s guidance: study ten thousand paintings and walk ten thousand miles and make no allowances for haste or, for that matter, anything else because along the way the search does get harder and the road becomes strewn with potholes, dents, regrets and ruts. I’ll take the long view because let’s face it subsidized freedom is for bankers.

Simply put, I admire the stoic and splendidly solemn. I use premixed hardware store paint and a cut-and-build method: stacking and superimposing discarded cardboard just like laying bricks right on top of each other. These blunt marks, poured, cut, slow and shaped, look to me like emblems or bodies longing for life of their own. They need from me no more than to be fixed, pinned down and secured in space, even if occasionally by chance or luck. Vertical, standing, and poised they want to suggest a presence or body or the impression of a handshake or gesture, like the greeting of an old friend. Some of these recently completed works (some started in 2007) have been repainted, reassembled and hammered out over long periods of time. My hope is their insistent physicality makes a reasonable claim for taking up space and that their relentless self-editing gives them bodily restitution, compensating for their acute (absurd) stubbornness. Their meaning is fixed by their own autonomy: they are artifacts, set apart, self-sufficient, and speaking on their own terms. In my better moments I consider them to be visible traces of my hand, rooted in the real, the not-manipulated, and the not-over-parented. So my parting words to them as I deliver them into the world: be like geese, stay calm on the surface and paddle like hell below.

Artist George Negroponte is about process. After almost four decades of making art, his work can be viewed in three distinct phases with the commitment to abstraction the essential connection across all. Born and raised in NYC, George Negroponte studied art at Yale with Bernie Chaet and William Bailey. His work is held in the collections of numerous museums, including the Metropolitan Museum of Art, and he has exhibited extensively in New York City and internationally since 1977.

The complete interview spans over a year and can be viewed in it’s entirety here. Excerpt below:

Pat Rogers: Here we are about 11 months later and a solo exhibit of your work opens at Anita Rogers Gallery in the middle of October. Can you tell me a little about the most recent work? Has your work evolved in the way you might have expected?

George Negroponte: Gosh, I’ve come to expect very little but I’m grateful my work has continued to move forward. A lot of the issues we discussed last October still feel very current and relevant. I’m on a much better track these days and I sense more of a steadiness and stability in the studio. Most of these new works happened virtually on their own terms. I stepped aside.

PR: What do you think accounts for the change in perspective?

GN: Well, imagine taking 10 years to get home and I hope that sounds familiar. My roots are from the island of Ithaca so I imagine Odysseus may have played a role in my story, too. But in hindsight I should say that making art is really hard. Franz Kline once said it’s like waking up in the morning and finding your arms stuck in the mattress. Making art requires insights that are altogether of a different kind, like needing to see better, hear better, and probably live better. And more than anything needing to know how to receive. This probably requires a sense of balance I can’t account for.

PR: It sounds tough. What do you feel is the most significant change in the new work?

PR: That is a change. Have your inspirations changed since we spoke last year? In essays written for your exhibitions, you reference Merleau Ponty, Phenomenology, Cezanne, zoology, Frank O’Hara, Vittore Carpaccio, geese, rubber boots and a host of all kinds of things.

GN: I’m motivated by the idea that the Enlightenment still matters and that art and culture once elevated us from the Dark Ages and inspired us to consider our own inner lives as important and vital. Nonetheless, today our resources are probably more likely contingent, small and fragile. I’m pretty sure I’ve come to understand that when I’m working well I’m able to get beyond what I call my own. I go somewhere else. In the meantime I depend upon everything I’ve come across and I’ll use anything and everything I can possibly muster up because knowledge and experience do matter.

PR: Does this mean smoother sailing ahead for your art making?

GN:  Who knows? My son came back from Sweden with a tee shirt that has a Franz Kafka quote: “If you see light at the end of the tunnel be sure it’s not a train.”

GN: Well, maybe not, because it’s cautionary, too. I’ve worked my entire life to learn a few things and that list isn’t that long. Making art is like getting clued in at a certain moment. It could be that simple, because for a moment in time you give up on yourself. You take a serious look at what really matters. Then, and only then, something starts to happen and you watch it like an observer. It’s magical because you don’t own it and you don’t control it. You can’t even help having it happen. And for a single, brief moment, you realize you’re free. That helps a lot.

Anita Rogers of British American interviewed on Greek cosmos FM with Tereza Panagiotopoulos-Bonny. Anita Rogers discusses British American Household Staffing and the Greek American community. Anita also discusses her Greek Rebetiko and Smyrnaiko singing, with her group based in NY called I Meraklides. She has been singing the old songs of Greece since she was 7 years old. Tereza is based in Athens, Greece but conducted the interview in NYC.