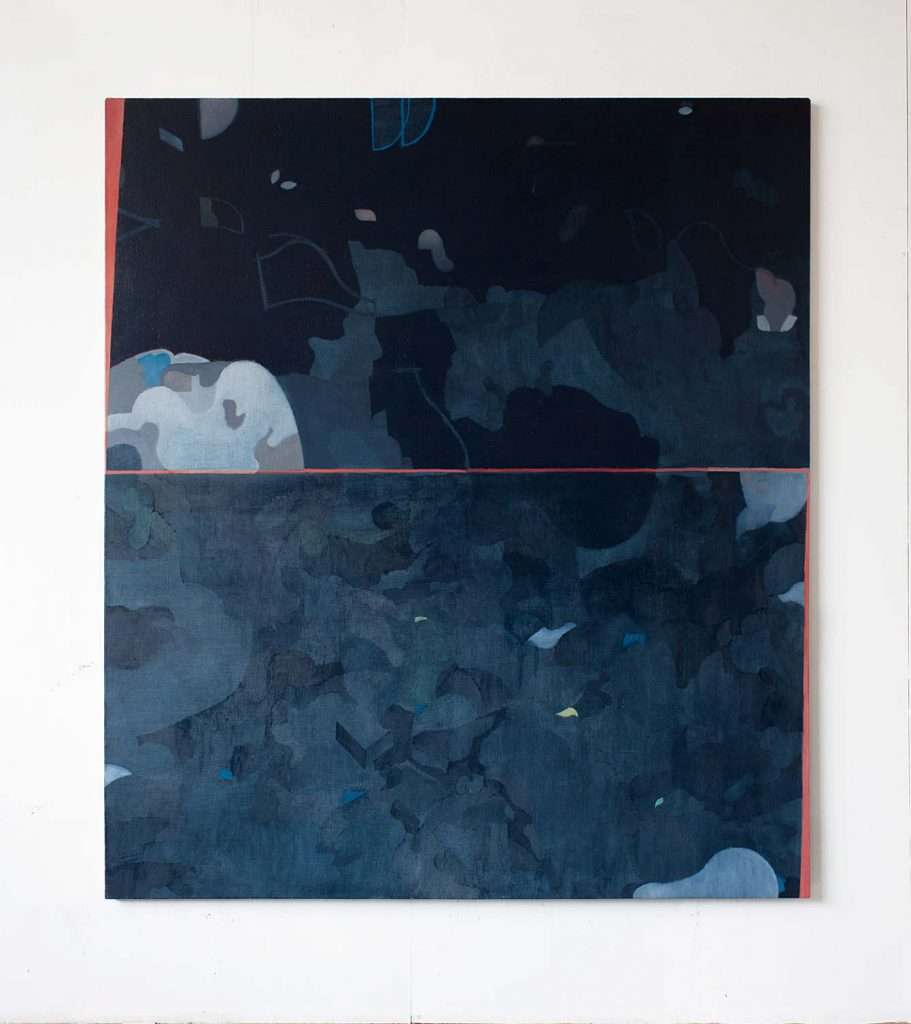 Young Space: What ideas are you exploring in your practice?

Tristan Barlow: My paintings are a mix of ideas that have built up over the years. I have a very strong relationship to art history, old Italian masters of the quattrocento, and the romanticism of ideas concerning space, ruminations of old teachers that have bounced around in my head and turned themselves into mythology. Though my paintings are, for the most part, “abstract,” I think of them more as an arena of spatial possibilities where the confluence of ideas is transformed into a visual language of symbols. Mark-making, layers, pigment, and a willing suspension of disbelief concerning the impossibilities of space lends itself to a world of visual fictions.

TB: I work with oil paint and that affords a plethora of possibilities. I experiment often in my application of paint. I edit, scrub, scrape, layer, etc…

Visually, my process is a filtering of ideas and notions from all sorts of sources. The idea of a mirrored image and Narcissus can send me through 20 paintings. So can a trip to the British museum or the light from a beach in Florida. Or what it would be like if Botecelli were to make a whole painting of grass and flowers? What if the Ancient Egyptians had internet? 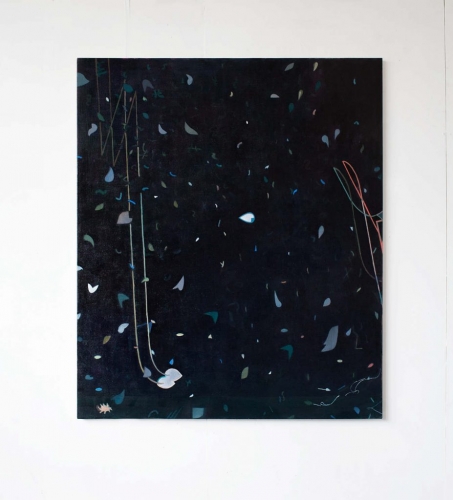 YS: Do you have a mentor, or a piece of advice (or both), which has influenced your practice?

TB: My first professor in Mississippi, who I must give a lot of credit to, told me, “Son, in this business you gotta fish or cut bait.” That, inexplicably, has come back to mind many a time. London based painter Tristan Barlow is in a two person show with Dutch-born photographer Hans Neleman at Anita Rogers in Soho. Both artists explore processes of accumulation and excavation of cultural imagery and sensual physical substance. Barlow employs layers of marks and shapes that gel into luscious intuitive abstractions that convey a dynamic sense of place. Neleman constructs framed assemblages with great attention to the nuances of mystery and meaning latent in his time-worn found materials and images.

Barlow (b. 1990, Jackson, Mississippi) studied at the New York Studio School with Carole Robb and at the University of Southern Mississippi before receiving his MFA from the Slade School of Fine Art, London. The artist now lives and works in London. Barlow’s large-scale expressive works on linen are evocative explorations of spatial relationships, communication, color, shape and scale. On the recent works included in this exhibition, Barlow writes:

My paintings are visual fictions, constructs of spatial tensions.  Painting is a collection point for thoughts, personal philosophies, and abstract notions of what I perceive to be the world.  It is a physical process that involves an extensive relationship to heavy metals, newly synthesized pigments, and mysterious powders, and processes as old as the hills.  It is the internet and the Ancient Egyptians pulled tightly into a collection of marks that delineate a visual experience and image.  It is a space that exists on a surface and in space. Painting is a collection of paradoxes.

Through making a mark on a surface, scraping, scrubbing, destroying, and reconstructing, a painting becomes a fiction that requires a willing suspension of disbelief, a mythic narrative where the protagonist is a mark on a surface of the 2- dimensional picture place that holds infinite potential for visual spaces.  I don’t know if either of these notions are tangible or real as much as they are mysteries or half-truths that I believe out of choice and necessity.  I keep on the edges of truth and let the actions involved in painting become more imperative, more mythological in my mind.

Dutch-born photographer and artist, Neleman (b. 1960) studied Fine Art at Goldsmiths University in London. He holds a Bachelor’s Degree in Film & Photography and a Master of Arts Degree from New York University. He studied with Robert Mapplethorpe, Duane Michals and Arnold Newman. Neleman’s collaged works, in the tradition of Joseph Cornell, are put forth in distressed iron frames housing astute composites of old and new, found and created objects addressing sexuality, mortality and identity. On the assemblages, Neleman states:

Elements of myth always lie between perception and concept: they are signs. This perception—or, the image—is linked with something concrete, whereas the concept can refer to something else, and the potential metaphysical references are unlimited.  David Henry Thoreau stated: “The question is not what you look at, it is what you see.”