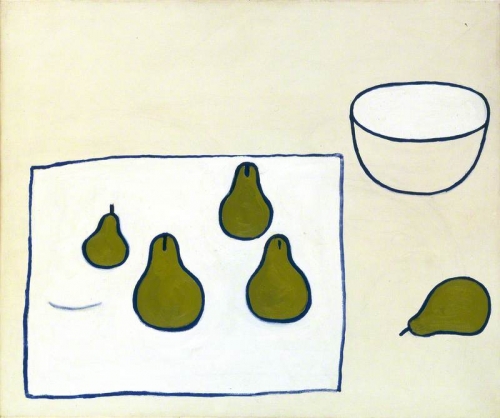 To some art critics, the twentieth-century British artist William Scott’s kitchen-table still lifes are too timid – as Roberta Smith wrote in The New York Times, they can be seen as ‘abstract paintings for people who don’t like abstraction’. Others, myself included, find them enticingly reduced and for the most part easily readable, which is part of their charm.

Scott’s compositions are striking in their simplicity, and somehow both pleasurable and puritan, sensuous and serene. A few boiled eggs, a couple of ripe pears, fresh mackerel on a plate, pots and pans, a bunch of grapes: these are his humble subjects. As he once said, ‘I find beauty in plainness’.

Born in Scotland in 1913 and brought up in Northern Ireland, Scott’s surroundings were grey and barren, his upbringing strictly Presbyterian. The objects he painted in an often-sombre palette were, he said, ‘the symbols of the life I knew best’.

After his father died trying to save some folk from a burning building, the local council raised funds to send the 15-year-old to Belfast College of Art. From there, he won a scholarship to study at the Royal Academy of Arts in London, where he bunked up with the poet Dylan Thomas and two other Welshmen and married fellow student Mary Lucas. In the Second World War, he was a cartographer, and in its wake, he was a pioneer of British abstraction.

Read the full article on ArtUK.org