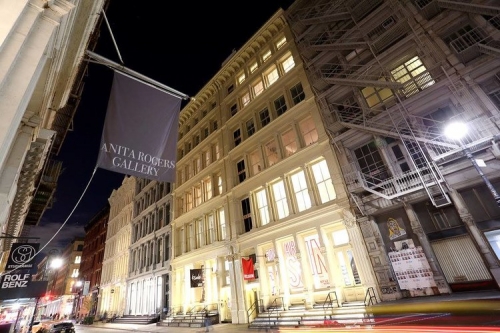 Curator Caroline Spang sat down with Gallery Owner and Director, Anita Rogers, ahead of Taverna Rebetika, an annual celebration of Greek culture taking place Dec 1 at the Anita Rogers Gallery.

CP: How does your background and experience living in Greece influence the artists and work featured in the Anita Rogers Gallery?

AR: My parents held 1960s values. They were free spirits, educated and open humanitarians who valued folk culture. My father moved to Greece in 1962. The mentality and culture in 1980s Greece reflected 1960s Western Europe: unspoiled and carefree. This was a time when the art world had more universal meaning and depth – before the mass market idea had really taken over. My values are rooted in this time and these memories.

I approach the gallery from an artist’s point of view as I was raised by an artist who understood art as something that was in search of truth, searching to understand what it means to be human, exploring that which connects us deeply as humans, almost approaching the metaphysical but while staying rooted in the human experience and truth. This shaped my values and approach to running a gallery in NYC. I choose artists whose visual abilities are exceptional and whose aesthetic approach and philosophical ideas are in line with the beliefs I described and in line with the values that were held, as I remember them, pre-mass media and before the contemporary art scene became more of a mockery and the overblown financial marketplace that it is now.

CP: What is your process of selecting artists to work with?

AR: I can tell very quickly when I look at the work in person. I judge by looking at the work and engaging with it. The work will speak for itself. Finding artists good enough is the most challenging part of running the gallery. There has been a culture of “anything can be art” for some time. This lack of discernment results in having to wade through so much work to even start to find potential fits for us. We are only interested in art we feel has the right essence—that which will withstand the test of time. We call ourselves “incubators.”